When It Comes to Culture, Marketing, and Tourism, How Thin is the Line Between Representation and Exploitation?

Walk into any tourist gift shop, in any city, in any country, and you’ll find shelves overflowing with souvenirs. In these souvenirs, you’ll likely see an idealized image representing the place you’re visiting. You know them: they’re printed on t-shirts, wish-you-were-here postcards, and stitched on beach towels. They can also come in the form of fridge magnets, kitschy ornaments, snow globes—or any other type of product that acts as a memento.

The romanticization of such images and the context surrounding them—in Hawaiʻi, specifically—is something that Drew Kahuʻāina Broderick, an artist, independent curator, and community educator from Mōkapu, Kailua, Koʻolaupoko, Oʻahu, Hawaiʻi, Moananuiākea, explores in his work.

“There are so many images of Hawaiʻi. One particular image that continues to circulate unchecked represents the archipelago as an idyllic, romantic “Paradise of the Pacific,”” Broderick says, speaking to REACH. over the telephone from Oʻahu. “And, the reasons why this image of Hawaiʻi has spread in the ways that it has are economic.”

Tourism in the Pacific at large, he adds, is very much rooted in a legacy of empire. “My interest in challenging and questioning stereotypical portrayals of Hawaiʻi comes out of a commitment to  educating myself about the histories of settler colonialism and legacies of U.S. Empire in the Pacific. This interest and commitment developed in parallel and eventually intersected for me as I was becoming more aware of what it meant to be an artist in Hawaiʻi and what it meant to be a responsible artist in Hawaiʻi.”

“36 Views of Lēʻahi” and Ideas of Representation 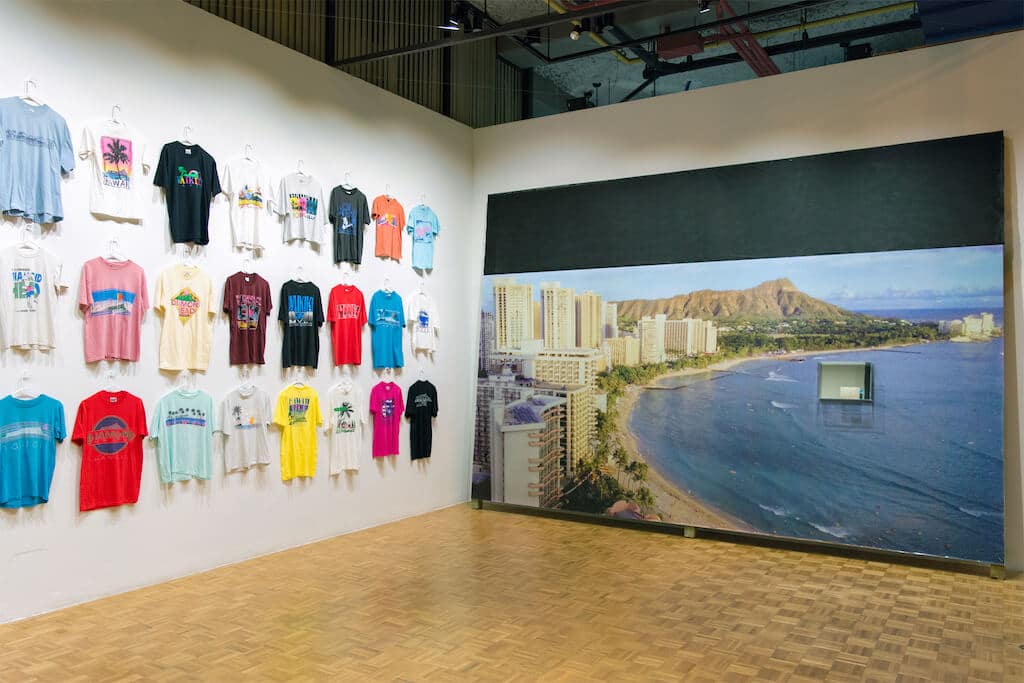 Installation view of Diamond Head, exhibition at the Commons Gallery, University of Hawaiʻi at Mānoa, 2017. Photo: Courtesy the artist

Broderick’s exhibition Diamond Head exemplifies this intersection well. The exhibition took place at the University of Hawaiʻi at Mānoa in 2017 and delved into the representation of Lēʻahi, a dormant volcanic tuff cone also known as Diamond Head, as well as the role the crater has played in Hawaiʻi’s recent history, primarily for the tourism and the militarism industries. Some pieces of work within Diamond Head include “Visitor Information,” a display stand stacked with pamphlets that read “the MILITOURIST IMAGE”; “Construction Wall I (Landmark at a Distance),” pictured above; “Landmark Looking at Itself in a Mirror,” a vintage postcard propped up to face its own mirrored reflection; and “36 Views of Lēʻahi,” an installation comprised of 36 novelty t-shirts.

“36 Views of Lēʻahi,” which Broderick explains is about working through ideas of representation of Hawaiʻi’s land and surrounding waters, was also a highlight of Transits and Returns, a 2019 group exhibition at the Vancouver Art Gallery that considered the different impacts colonialism has made on place, culture, and identity through the works of 21 Indigenous artists.

“It was interesting to be invited to show “36 Views of Lēʻahi” in the context of Transits and Returns because its inclusion in the exhibition simultaneously perpetuated and problematized a certain image of Hawaiʻi. The hope was that, in doing so, other kinds of conversations could take place around these types of representations,” Broderick says.

In the t-shirts, Lēʻahi appears as a mascot of sorts. Broderick purchased each of the shirts through different online vendors located across the world—an act that represented a return to home. “Sometimes I consider the process of reassembling these t-shirts as a form of repatriation—albeit not ancestral remains, iwi kūpuna , but, still, an effort to return something to its source,” he explains.

The Thin Line Between Representation and Exploitation, Especially With Regard to Indigenous Cultures

These types of images—and especially images pertaining to Indigenous cultures that have been colonized and systemically marginalized—that are marketed to tourists in a reductive way for the purpose of commercial consumption—and often white consumption, for that matter—is utilized frequently in the tourism industry. In Vancouver, for example, many gift shops (and, to be clear, these aren’t the shops in institutions like the Bill Reid Gallery or the Museum of Anthropology, but rather generic storefronts that are not committed to promoting awareness and understanding of Indigenous cultures) sell items in the image of things that hold symbolism and deep meaning in Coast Salish and other First Nations cultures, for the purpose of both inciting nostalgia for one’s West Coast vacation and reflecting the history of our unceded territories.

Are these images and the way they are used related to a long-term effect of colonialism? Absolutely, says Broderick.

“Tourism and Defence, Hawaiʻi’s top two industries, have come at the expense of Kānaka ʻŌiwi—dispossession of Native Hawaiians is ongoing, land taken continues to be occupied for touristic leisure and military defence. These industries are directly related—and I don’t really think that’s a matter of perspective or opinion, I think it’s a historical fact. We are speaking about a phenomenon known as “militourism,” to invoke poet and scholar Teresia Teaiwa’s neologism. I can’t comment on Vancouver, but in the context of Waikīkī, an epicenter on Oʻahu, militourism capitalizes on the values and culture of a people and a place without regard for Native Hawaiians or Hawaiʻi.”

How Can Tourism Move Forward Responsibly? 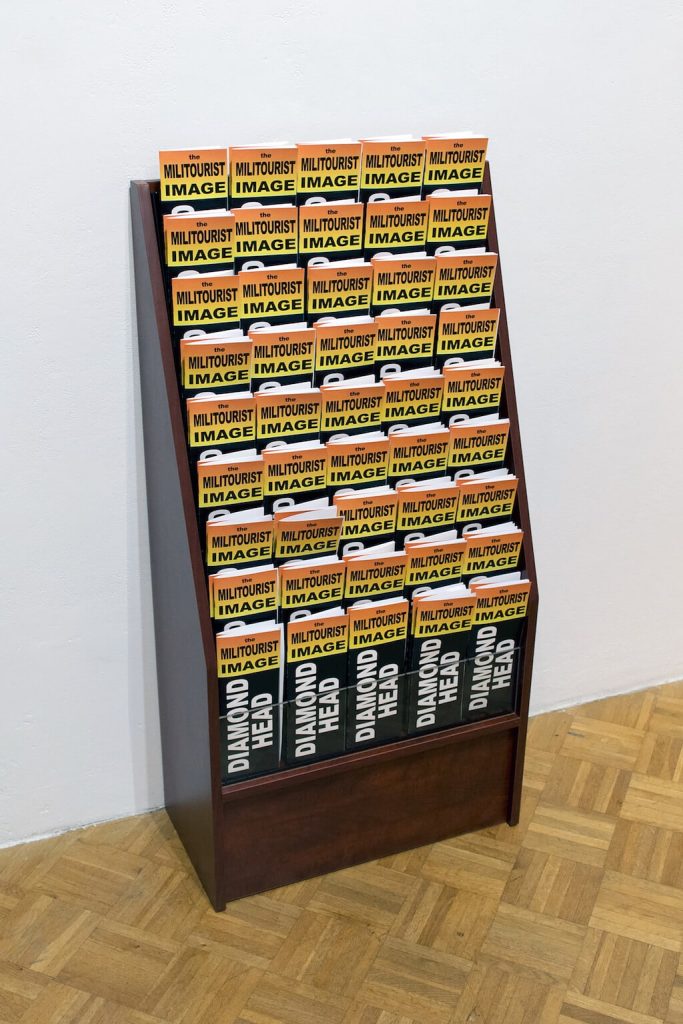 At the same time, tourism is an extremely important industry—especially when it comes to providing employment opportunities, supporting the local economy, improving infrastructure, and even yielding valuable educational opportunities to visitors. And, in promoting a place as a destination, representation of the people of that place is urgently integral and crucial. But then how thin is that line between representation and exploitation?

Very thin, Broderick says. “I think in the tourism industry in Hawaiʻi, there’s also a history of self-exploitation—which is a very delicate issue for many, many reasons. Much of the population, Native Hawaiʻian or not, is dependent on and involved directly or indirectly in the hospitality industry, and/or the service industry on the islands. Families depend on revenue generated by nearly ten million tourists a year. And right now, [due to COVID-19], we’re really feeling the impact of that. But I think it’s related to what I was saying earlier: we can celebrate values, and we can celebrate a culture, but if that celebration isn’t in service of those values or that culture, then it’s exploitation.”

But, Broderick adds, it doesn’t have to be delegated to a positive-versus-negative, either-or conversation. “I think, as with most things, it’s more of a question of how,” he continues. “Like, how is tourism happening and who is it in service of?”

He references Hoʻoulu ʻĀina, a cultural resource centre and initiative in the Kalihi Valley, as an example of responsible engagement with place. The effort offers a variety of programs like Mahi ʻĀina, where one can partake in the cultivation, propagation and harvesting of food; and Koa ʻĀina, an organic reforestation and agroforestry project. On their website, they emphasize “the benefits of place-based learning” and doing so within “meaningful experiential and educational activities.”

“I think when grassroots community organizations like Hoʻoulu ʻĀina are able to get involved in an industry that is so far removed from its source, if we are working towards systemic change, this is when transformations start happening,” Broderick says. “Because the visitors that are interested in going to a place like Hoʻoulu ʻĀina and growing the land as part of a community, they’re not going to leave with a novelty t-shirt. They’re going to leave with an experience that is rooted in people and in place—Native Hawaiians and Hawaiʻi.”

And these kinds of experiences, Broderick adds, are helping to build a different kind of economy. One that looks deeper than marketing campaigns that position the Hawaiian islands as a romantic “Paradise of the Pacific,” or British Columbia as a “Super Natural” destination—one that, instead, looks to learn, understand, and appreciate what truly lies beneath the surface of those images.

When It Comes to Culture, Marketing, and Tourism, How Thin is the Line Between Representation and Exploitation? was last modified: October 7th, 2020 by Yasmine Shemesh

Yasmine Shemesh is a freelance journalist, with a music and culture beat. Her work has appeared in publications such as Billboard, NYLON, Flare, Exclaim!, and more. You can follow her on Twitter and Instagram at @yasmineshemesh.

Digital Transformation is the New Normal